The prologue introduces us to a woman who is distracted on a date. It’s understandable though as she lost her husband last year, she can’t stop thinking about him and the fact he was murdered. It’s hard for her to move on, when this tragic event holds such a padlock around her heart.

She knows the only way to unlock it, is to find out who killed Jack. She’s pulled back to the present, her date is getting restless, he wants more from her than she wants to give, he leads her outside… down a side street… and then… a guy in a hoody saves her…

And similar to the woman being dragged from her thoughts, the reader is pulled away from the prologue and thrown into part one; with no clue as to when, why or how that captivating prologue fits in.

We now know the woman is called Poppy. Poppy is reliant on pills; her psychiatrist: Dr Nash; her best friend: Layla; and Detective Grayson who still holds out hope to catch Jack’s killer. But within pages it’s clear that Poppy’s support team is not enough, she’s losing herself to thoughts, memories, dreams… all muddled together. Whilst Poppy is confused and doubting what is ‘real’ and ‘not real’, what keeps her going is her determination to uncover the truth. She’s grasping at it. She knows she’s close.

The book is told completely from Poppy’s perspective, which means the fogginess that surrounds Poppy as she dissects dreams from real life, seeps into the reader. I felt like a character in Inception, hoping that a spinning top would help keep me on track and let me work out which seeds Unger had planted to actually grow in the right direction and which she’d sneakily slid in, that would turn into prickly vines that leave you in a corner!

The complexity of this plot dives deeper by flicking from past to present but again, you have no clue if you’re in a memory or a dream! Quite early on you realise that you’re not solving a simple rubix cube, and you’ve been handed one of those dodecahedron-shaped ones – gahhhhhhh, it’s impossible to try and leap ahead of Unger, she really has to lead you to the truth!

There’s an intensity and depth to this plot which pulls from Unger’s descriptive and detailed writing style. It requires the reader to focus fully on each page and not skim read. You become a disciplined, focused and utterly absorbed reader – was Unger a teacher in a past life?!

Which characters can you trust? It’s hard to know. They’re all hiding things but which secrets are linked to Poppy and Jack? You won’t find out until the very end!

Has this piqued your interest?

Under My Skin is out now in paperback and eBook published by HQ.

If you’d like to find out some more about the book, you can check out the other tour stops that Lucy organised (thank you!!!!!!!!!): 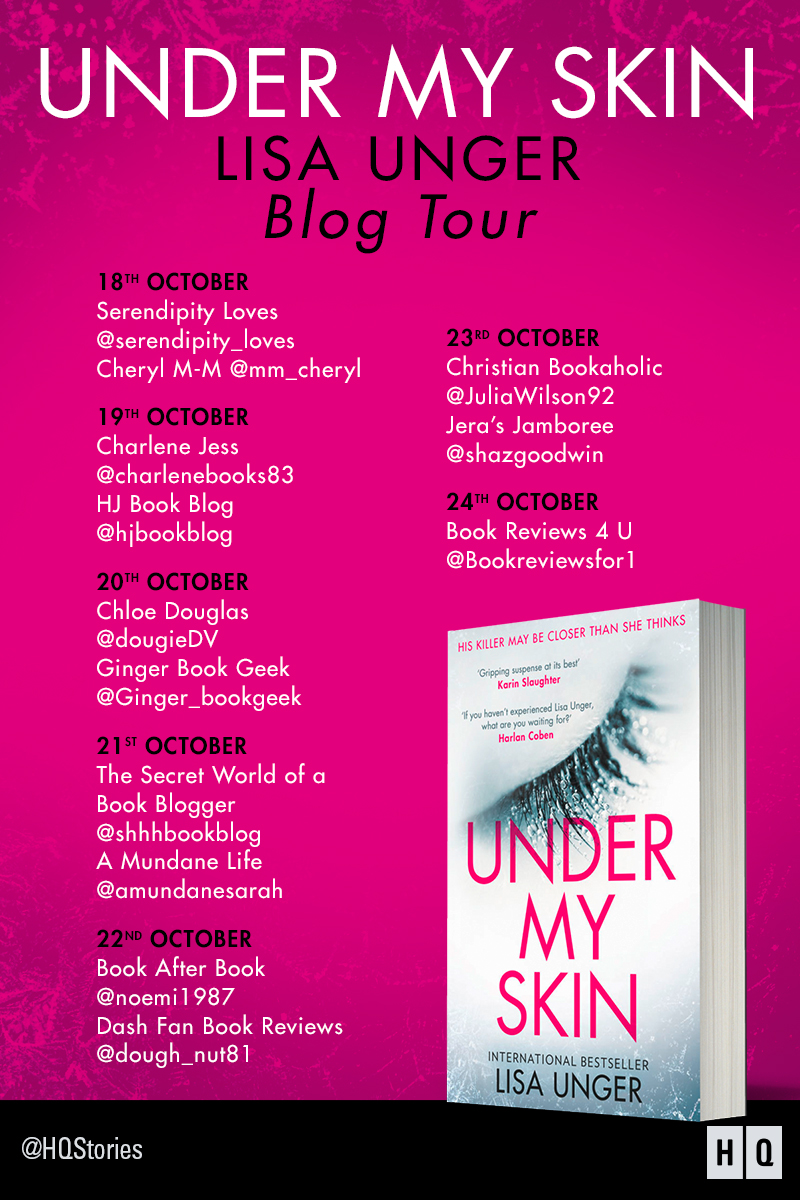 Just a little reminder – you can now find me over on twitter under @reviewsbychloe (previously dougieDV), I just thought I’d be a bit more consistent!