Hello, hello, helloooooo! How are we all doing today? I’m very excited to have you here for my stop on The Chestnut Man blog tour, that has been organised by the lovely Jenny Platt! Thank you Jenny for asking me to join the tour and introducing me to this beast of a book!

So what did I think? Well let’s start at the beginning…

The first chapter takes us back to 1989 to a gruesome murder scene at a farm, and we get our first glimpse of chestnut dolls.

We’re then brought forward to present day and Laura is being tortured. What’s the link?

The chapters then flick through a number of different perspectives, Thulin and Hess are the detectives following Laura’s case; and we’re also introduced to Rosa Hartung who is returning to her ministry job after a year. Rosa has been off work to cope with the disappearance of her daughter and while the police have closed the case, the body has never been found.

The police discover something unusual at Laura’s murder scene – a chestnut man. But of course, Hess and Thulin known nothing of the 80s case and so they need to pursue all the more current leads. Then the forensic report comes back and everything changes. It’s revealed that Laura’s death must be connected to Rosa’s daughter’s disappearance but how?

The twists don’t stop there as the detectives realise the killer is playing a very nasty game of revenge. But against who? The victims? The police?

Engrossing from the very start, this crime thriller was utterly clever at keeping the reader on their toes until the very end.

I was stumped who the killer was, I kept taking stock and evaluating all of the characters (going on the assumption that you’ve already been introduced to the killer in the first third of the book), and I really couldn’t figure it out. When it was finally announced I was shocked – it made total sense but my brain just hadn’t taken notice of the subtle hints.

I really enjoyed Sveistrup’s writing style, it had the perfect balance between description and pace – you really get to know the characters but without getting bored by too much detail. The short chapters will also go down a storm with fellow readers, as it works its usual magic of making you read just one more chapter, over and over again!

Although it’s a hefty book at over 500 pages I was still gutted it ended, I felt Rosa’s story could have been explained and explored a bit more.

With boundaries pushed, suspense high and a large cast of characters; sit back, put your feet up and let this book entertain you!

If you’d like to read more about this book, why not check out some more posts from fellow book fans, you can use their twitter handle below to find a link to their blog post: 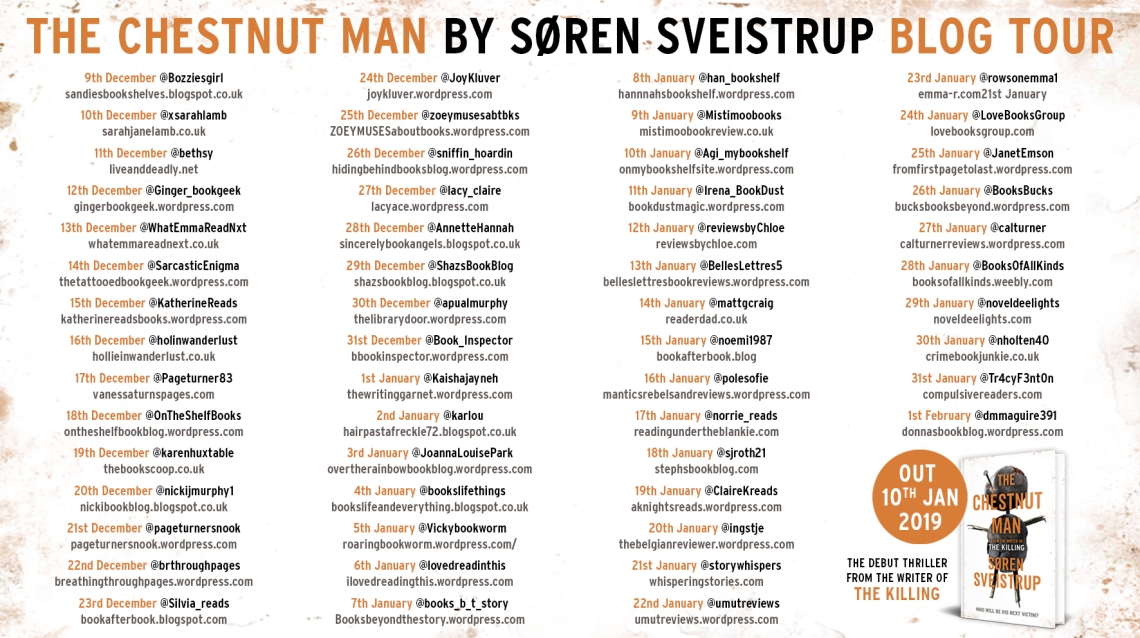 The Chestnut Man is out NOW in hardback and eBook form published by Michael Joseph.