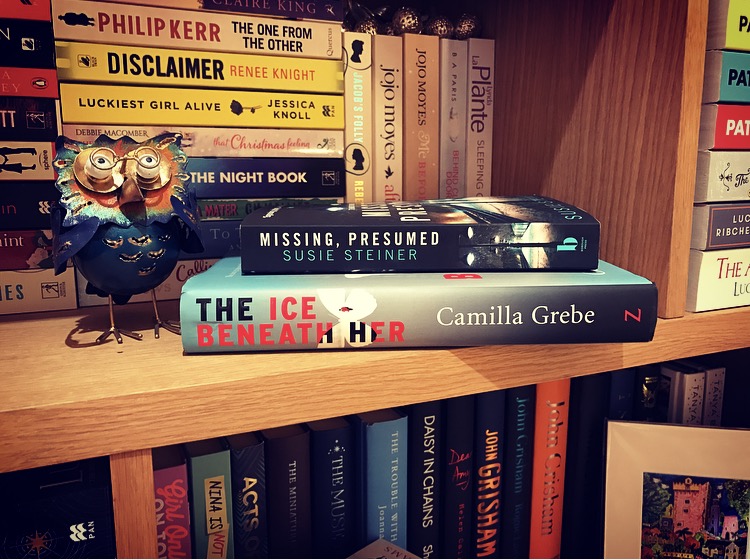 Missing, Presumed vs The Ice Beneath Her

I felt like spicing it up by reading two thrillers at the same time and comparing them. I picked The Ice Beneath Her (IBH) by Camille Grebe; a Swedish author, and a British thriller by Susie Steiner called Missing Presumed (MP). So who will win? The translated or the traditional?

One of the most important chapters of a book – it needs to set the scene, spark imagination and leave you wanting to read on. Both authors chose to start from the eye of a detective on the case and show the reader what they get up to prior to being called to the scene. Peter in IBH is visiting his mother’s grave whilst Manon in MP is enduring a rather disastrous date. Steiner’s opening pages were light hearted and made you warm to a key character, whereas Grebe chose to use short jumpy sentences with a darker feel. Which gripped me more? IBH won this category.

24 year old, Edith Hind is missing from her flat in MP and the police are hot on the case to find her before it turns into a murder investigation. There’s a 25 year old girl found beheaded in Jesper Orre’s mansion and it’s unclear who it is in IBH. One victim identified, one not; which style did I prefer? Either, it’s a draw on this one.

The books are a similar length so in theory the test is which did I read quicker. I divulged IBH in less than two days whereas MP took me four days – this was due to the slow parts of the books causing my mind to wonder and I always close a book at this point. The more moments my mind wonders, the slower the pages get turned…. IBH won this round.

Both books chose to use multiple character view points with the chapter headings providing an indication of whose eyes we were looking through. I LOVE this style. It’s perfect for a police case. There was however one significant difference, IBH chose to include a view point from a character directly involved in the crime whereas MP only utilised the detectives and the victim’s relatives perspectives….up until the very last chapters.

One direct and one indirect, the indirect approach utilised the police detectives’ own life problems to distract from the crime which meant you weren’t guessing who did it?! as much, whereas the direct approach in IBH meant you understood the events leading up to the crime.

The winner? Tricky I prefer the direct style but it only works if you’ve got a complex plot, it worked in Daisy in Chains but not so well in IBH.

Who had the bigger range of suspects? Definitely MP. It could have been anyone: the boyfriend, the best friend, the father, the local criminal and even Manon’s new boyfriend seems a bit shifty and far too interested in the case… and that’s me just thinking off the top of my head – this book pointed the finger in numerous directions! Whereas IBH had a rather limited selection of characters and I cottoned on pretty quickly who it was because of this. MP wins.

Which did I prefer? I can’t decide! I loved the bluntness and jumpiness of IBH but there wasn’t enough plot twists which meant I’d figured out the plot before I’d entered the last 150 pages. MP was full of plot twists and kept me guessing up until the last 30 pages, the difficulty I had with this book – there were too many slow chapters which focused on the lives of the detectives instead of the case…which I found a little dull.